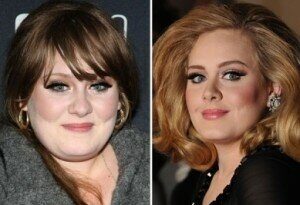 Adele is sporting a new look and it’s not all because she’s lost some serious weight recently. The full-figured crooner has an amazing voice, stunning eyes and a trimmer waist line of late. She also appears to have a trimmer nose as well. Could it be plastic surgery?

Adele has not come forward to speak about the rumors surrounding her thinner nose, so it’s hard to say if she’s had surgery or not, but there is definitely something different about the shape of her nose down the center.

In older pictures of Adele, her nose is very rounded at the tip and appears almost bulbous. In more recent pictures, it’s very obvious that Adele has lost some weight and her face appears much more defined. Her nose appears sharper as well, making it sleeker and narrower in appearance.

While some are dismissing claims of a possible nose job by pointing out that clever make-up can have just as much of an effect on slimming the nose that a very subtle nose job can. Of course, weight loss can make a nose look different on a face as well, but that’s primarily because the face behind the nose changes.

In this case, it’s easy to spot the changes to Adele’s cheekbones and jaw line – she’s definitely lost weight there. But it’s a far cry to say that her nose is thinner because she’s been focusing on eating well and exercising. Instead, it’s much more likely that she’s had just a tiny bit of work done to refine the look of her nose and make it more proportionate to her face.

Whatever she’s done lately to her face, we have to say that we think it is absolutely stunning – weight loss, surgery and clever make up have combined to make this one very talented, attractive star.