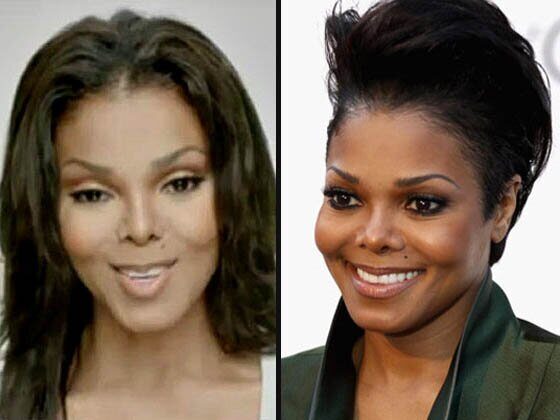 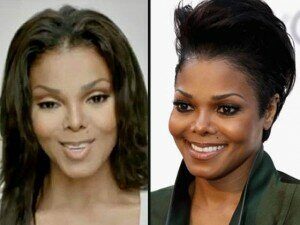 Janet Jackson has a new spot in the limelight. She’s doing commercials for weight loss company NutriSystem. This isn’t a huge surprise since Janet has obviously struggled with her weight a bit over the years and celebrity endorsements are huge in this industry, but there was something surprising about Janet showing up in the commercials – her appearance!

Janet has had work done in the past, but of the members of the Jackson family her face wasn’t as altered as some – her brother Michael and sister Latoya spring to mind. But now the times are changing for Janet and she has recently embraced some more drastic procedures as her face has narrowed and taken on a much young appearance.

In a side-by-side photograph, you can see that Janet’s nose has shrunken dramatically from its original size and shape. It’s now narrower than ever and almost unnatural in appearance due to her ethnic heritage. Her eyes appear more prominent as well, but this is likely the result of fillers in the areas under her eyes rather than work on the eyes.

Janet has followed suit with many others who have recently embraced chin implants as a way to lengthen the overall dimensions of the face and create a long, leaner look. Weight loss might have contributed to the leanness, but the chin implant definitely helped to reshape her face overall. This part of her transformation we are enjoying, however, because it is a flattering effect.

Finally, the skin tone of Janet’s newest pictures appear to be several shades lighter than her previous pictures. This may be due to lighting conditions, special make-up or perhaps some laser technology, but whatever the reason, the number of changes in Janet is almost too many too soon. We’d rather just enjoy her talent with small changes to enhance her beauty rather than overshadow it.