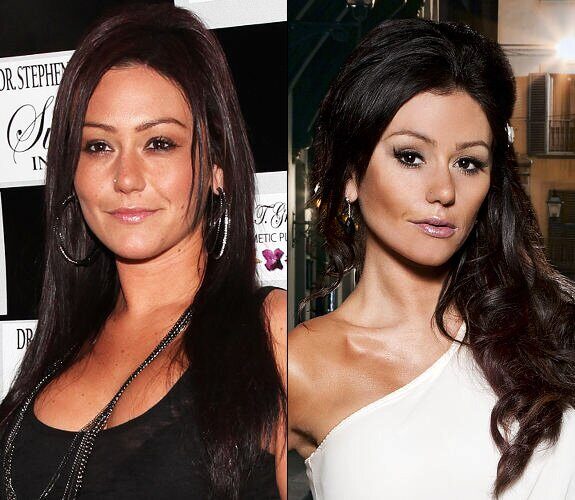 Not too long ago we reported here that JWoww, aka Jenni Farley, of Jersey Shore had a significant breast augmentation procedure. Now, with the new season of her show barely underway, JWoww has started rumors flying again about more plastic surgery and this time everyone is taking a hard look at her face to see what looks different and improved.

There are a few things we know for sure. We know that JWoww lost some weight. We know that she had breast implants before the new season of Jersey Shore began. And we know that something looks different about her face, but it’s hard to pin down exactly what it is exactly that has her looking so much more polished.

The change from the first season to the fourth is astonishing and looking at JWow you can see there is improvement around her mouth and under her eyes as well. Her chin appears to be narrower, but that may have more to do with a bit of lost weight than serious surgery. Even her nose appears to be a bit different this season. The question is: What gives? Did JWoww have surgery again?

According to Dr. Anthony Youn, a prominent cosmetic surgeon recently interviewed for Shape Magazine, “Jersey Shore star Jenni Farley aka JWoww is denying reports of having work done on her face, but in my opinion she’s undergone some non-surgical treatments, like injections of Restylane to fill in her wrinkles and Botox to smooth her forehead. It’s one way the star may be trying to fight off premature aging caused by living an unhealthy lifestyle.”

Apparently the good doc thinks JWoww is living an unhealthy lifestyle (and we won’t put up much fight there), but we can definitely say that whatever she is doing, it’s definitely working for her!