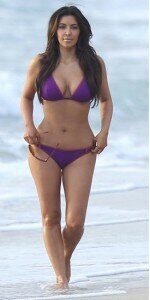 Kim has managed to have her picture removed from the advertising of a Mexican plastic surgeon just in time to land back in the spotlight for the possibility of additional plastic surgery. A buzz has surrounded Kim for quite some time regarding the possible cosmetic surgery procedures the reality star may have elected for herself.

We’ve gone through butt augmentation (fat transfers probably). We’ve done the boob job question and undoubtedly there’s been some Botox along the way, but now new pictures are showing off Kim’s toned tummy…where it wasn’t quite so toned before.

Normally we’d just suspect Kim has been working out a lot and gained some nice muscle definition in her abdomen, but since her entire waistline seems to have shrunk and nothing else has, the definition of diet and exercise don’t seem to add up to the possibilities we’re examining here. Instead, it’s increasingly likely that Kim had another cosmetic surgery procedure.

Liposculpting, or very specific removal of fat to create definition on the abdomen, is a procedure that is gaining a bit of attention for the realistic results it can create for patients. With the procedure, surgeons are able to use small liposuction cannulas to remove small pockets of fat to “sculpt” out results rather than trimming down larger areas with traditional liposuction.

The process between liposuction and liposculpting are very similar, but the power is in the details of the surgery. Precise hands leave behind six-pack abdominal muscles that look as though the patient has spent hours or weeks in the gym sculpting the waistline. More cost, less work, amazing result. It’s hard to tell if Kim has actually had a liposculpting procedure, but one thing is certain and that is that Kim is looking exceptionally well in her bikinis these days.