The Kardashian family is well-known for their plastic surgery, and mother-of-six Kris Jenner is certainly no exception to that rule. In fact, Kris just opted for a facelift to tighten up some skin on her neck and it would appear her jaw line and forehead as well. Unfortunately for Jenner, her new looks has also drawn a new lawsuit.

Kris signed on to promote a new skincare line called B&P, and by getting a facelift and then discussing her new lift publically, she angered the company. After all, how can B&P tell everyone Kris is looking younger and tighter through their anti-aging products if its common knowledge that she’s done a serious lift to achieve the same look.

According to Kris, the company has no right to be angry since her face lift didn’t affect her face, but rather her neckline. Looking at her latest pictures, it would appear that Kris has a bit more done than just a bit of neck-tightening. Her cheeks don’t look changed, but her brows are a wee bit higher and her jaw line is much more defined, making it look as though she’s lifted things up just a bit at least. Her neck does look tighter, however.

We’ll leave the legal wrangling to the experts, but we will say that as far as this site is concerned, Kris looks great and having a mini tuck can definitely be a great way to tighten up and beat some of the more annoying signs of aging including that loose neck skin, sagging skin at the jaw line and lines around the eyes – or perhaps her eyes were improved through B&P’s product after all. It’s just too hard to tell! 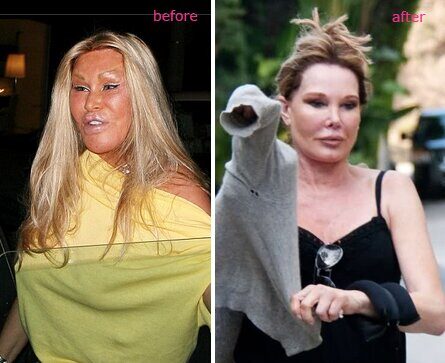